The non-chronological collected works of my misspent youth, with notes, for your reading pleasure. Most names have been changed because I probably didn't ask you first.


I hung out with Kara for the first time since Mom’s wedding. She told me all about how she ran into Kim Gordon at the SoHo Dean & DeLuca and how her friends in the fashion industry[1] decided that pale and sickly was kind of passé and gave me a JF[2] fifth grade lunch room “Ew.” I probably deserved it because I am the color of a slug under a rock in a world of never-ending night, despite the fact that I did go to the beach this summer (and spent the daylight hours writing in the back bedroom).

Anyway, we read all of Dad’s Vanity Fair and she showed me pictures of all the people she’s kind of connected through {Ivy League University].  Later we had those terrible, over-cilantro-ed burritos at Laughing Seed that have sucked since we were in high school (and yet we still eat them . . . why?) And then we went to New French Bar and ordered drinks and neither one of us were carded. 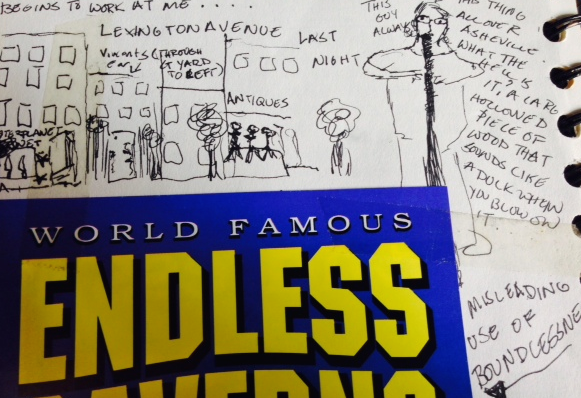 Last night, it was pretty downtown and everyone was out on Lexington. We walked down to Vincent’s past the requisite combo of hipsters and homeless people (and some homeless hipsters . . . I mean, this is Asheville).  We had an argument about Archers of Loaf  (Kara doesn’t like them . . . What?!)[3] and some guy in the Vincent’s courtyard chimed in and Kara tried to decide whether he was cute or not. She has an amazing, smart, funny boyfriend. And that guy in the courtyard looked like a greasy Rastafarian vampire.  “Is that your type maybe?” she asked me.

It’s the little stuff with her that always begins to work at me  . . .

[2] The girl in my elementary school with a permanent stink-eye so pronounced that even giving her a second glance in the lunch line was like challenging a Gorgon to a staring contest. Her wordless appraisal was so utterly ego obliterating, I swear to God it took me years to recover my ability to look a girl I didn’t know in the eyes.  I hope she’s found an interesting use for all that power (fyi, government agencies: she’d be super-effective at non-violent interrogation), but I suspect she’s sitting in some fancy restaurant now, making all of the other patrons feel fat, ugly, poor and useless.

[3] Obviously, I was really into this particular parenthetical construction for about a minute.
Posted by Unknown at 7:54 AM


Questions? Comments? Submit your own?