The non-chronological collected works of my misspent youth, with notes, for your reading pleasure. Most names have been changed because I probably didn't ask you first.


Last night was the prom and I didn’t have a date, so I tagged along with Kara and the German exchange student. I think he looks a little like a duck, but he bought me a corsage even though I’m not even really his date.

I wore a pink dress, even though I swore I would never wear pink again now that I’m no longer a blushing Juliet and now that love is something I know I will never have. [1] 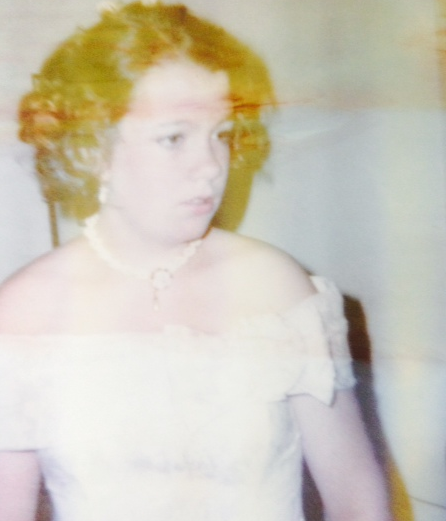 The dress was damask and off the shoulder and it looks like a bridesmaid’s dress off the clearance rack at Belk, which is exactly what it is. I still think maybe it was ugly, but it had a crinoline and a bow. I tried to be pretty, as if that would cover up the sound of my loneliness.

I do think I looked suitably romantic, even if my hair is still too short.[2]

No one really danced with me, because no on really danced after the power went out.[3] Justin and Justin and the other guys from the Radio Club tried to dj, but mostly I sat at a table in the dark wondering if this was it. Afterwards we went to this school-sponsored breakfast thing at the Wilton’s house, but nothing happened there except for me putting my foot in my mouth for the 4000th time and Mom picking me up and talking about the upholstery in the Wilton’s living room.

[2] I’d cut all my hair off (and dyed it orange) not quite a year before just prior to my abortive attempt at running away to California. At the time, it had seemed both symbolic and representative of the trapeze dress/striped tights + Sassy Magazine + New Order aesthetic I wanted to embody. But then I spent most of my sophomore year sucked deep down in some boggy Renaissance/Celtic Folk/Pre-Raphaelite/Tori Amos wormhole (mercifully short-lived) and spent a lot of time praying my hair would grow back faster, curlier and a gorgeous Waterhouse-painting auburn (it didn’t).

[3] Here’s how this actually went down: the prom was in the dining hall, a vaulted, mock-Tudor structure with exposed rafters and those chandeliers that look like ship’s wheels. It was built sometime in the first quarter of the 20th century and probably hadn’t been engineered to withstand rock and roll of any kind, let alone the terrible band hired for prom. This particular terrible band was an "alternative rock" covers outfit called (I believe) Chapter Two. The lead singer wore a ruffled pirate shirt and leather pants and had old Soundgarden hair. They came out, introduced themselves, hit the first line of “Under the Bridge” and promptly blew the power for that whole half of campus. This took several hours to resolve, during which time the faculty passed out flashlights (“for safety”) and various students tried to fill the dance floor by playing “Shadrach” and The Sex Police on someone’s battery operated boombox.


Questions? Comments? Submit your own?